A raft which vanishes into the boundless ocean of tomorrow

Emily writes about the adventures of childhood cancer and the changes she experienced after 3 years of treatment. For her, life has no rules - only lessons.

It was a typical winter noon. I got off the car and I faced a big brown-gray building. I had never seen it before. I knew that we had made an appointment and I was extremely nervous because not only I had missed school and I had done blood tests twice –my parents said that somebody had lost the results- but also there was a very strange atmosphere around me, a combination of anxiety, nervousness and fear. Something was happening, something big, but I couldn’t understand what. It was 13 January 1987 and it was the day of my diagnosis of Acute Lymphoblastic Leukemia (A.L.L).

Since then, almost 20 years have passed. I was treated in the Oncology Department of Children’s Hospital A. Kyriakou in Athens, Greece. After a 3 years’ therapy -including the “usual” examinations and tests- my family and I realized and decided that I had been cured of that disease, cancer.

I don’t believe that the experiences of those 3 years can be described adequately or in detail. In addition, I don’t believe that I can fully understand the impact that cancer had, is having and will have on my life. I will just make an attempt at sketching out some aspects of “my” childhood cancer and his effects.

I was about eight when I was diagnosed. My age didn’t allow me to understand or realize exactly what was happening to me and how this would change radically our family life. What I gradually learned was that I had a “kind of anemia” and I should receive a – (proved to be) painful - treatment. All these “pieces of information” were gathered from time to time through what I was told, feeling, seeing and understanding.

The recollections of treatment cause some pain for sure. Apart from the medical part of treatment, I remember very vividly that the atmosphere of desperation, which had been created after the diagnosis, converted into a very strong will to fight the “bad enemy”. I don’t know how but I was totally convinced by my parents that the only way to “win this bad enemy” was the one-way of treatment and its -painful- “ingredients”. When, once, I told, as a joke, that I was tired of all these and wanted to stop the treatment, nobody laughed. This could not be a joke.

The adventure of childhood cancer

The passing years are many and they have taught me that the experiences of past “scar” your present and your future. I feel that in the “adventure of childhood cancer” I both earned and lost a lot.

First of all, I practically lost half a year of the second class of elementary school. I couldn't attend my school lessons. Moreover, during the following two years, I was going to a nearby school, a fact that caused the loss and change of classmates and friends. Then, my body, my outward appearance, changed. I got too fat, my hair became rarer and, for a period, I had a great difficulty in walking. And all these changes were more than perceptible to other people. My external “involuntary” change caused also the change of their behavior and manners. Most of them were afraid of me and my change, others were laughing at me and some stood by me. I changed to such an extent that, when, 2 years later, I went back to my old school, my old classmates didn’t recognize me: “Are you the Emily we know?”, “You have changed a lot and you don’t look like her”, “Surely, is that you?”. And maybe their questions weren’t so absurd. I was the old Emily and I wasn’t. The leukemia had changed me not only outside but also inside, and these inner changes proved to be bigger. The extent of my inner change revealed to me gradually over time.

After the end of therapy, I continued my school studies and at the age of 18 I succeeded in the University Exams, without using the Greek benefit of exam-free access to the University. I didn’t want to use such a benefit because I was too young when I was diagnosed and this didn’t interrupt my studies. Furthermore, I didn’t –and I still don’t- like using “favors” which originate from an accidental, involuntary and negative fact of my past. I desire, then and now, to try and do my best based on my own power and strength.

In 2002, I took my degree in Philosophy, Pedagogic and Psychology and during the last years I have tried some jobs – secretary, teacher of Greek and English literature, journalist. At present, at 27, I’m working in a multinational company as assistant and I’m teaching English to children and Philosophy and Pedagogic to adults.

And after the three years, one word: Change

The leukemia “wind of changes” is still whistling around me. It has created a very strong desire not only to live but also to struggle for my life. When you become aware of the fact that you have survived a life-threatening disease, your own life gains a different meaning. You “lost” 3 years of your life in defending it. During these 3 years, you lost friends, your appearance had been –dramatically- changed, you learned not to count on people who judge you from the outside, your artlessness and spontaneity have “faded”, you lost “fellows” – you knew that some of the children of next bed had never gone back to their home or village, as you were told -, you lacked of games, fun, walks and excursions. In a word, you didn’t “live a short life” of your life and this happened without even having a chance of choosing something different. The only –real- option was one: fighting. You ought to leave nothing to fate or to destiny. After aaaaaaaaall these, your life becomes your “precious” and you should take care of it.

Another change was the diversification of my family bonds. I came closer to my parents and they came closer to me. At the leukemia punch, we decided to grasp our hands and fight. This made us and our ties stronger.

I also became different in facing the other people. I was –and still am- more cautious to new friends, trying to understand what is “hidden behind” someone’s appearance. I didn’t want to make the mistake that others did, to judge from the outside. In addition, I became more “examining” with others. I wanted to feel sure that they deserve to get involved in my “precious” life. Thinking a lot of reasons and consequences of something, even if this is something completely new, is one more inner difference.

Last, but not least, comes a very strange feeling: I don’t belong anywhere! I am not “normal” as far as I had suffered from childhood cancer and I am also not “non-normal” as far as I had successfully been treated from leukemia. Moreover, the term “survivor” makes me feel nervous. What am I? Am I a “semi-normal” person? Where do I belong? Sometimes, I have the sense that I am a very rare, strange and -why not?- exotic being, the “homo leukemious”! I desire to be like the others but, after all, I am not like them and terms such as “survivor” make it harder. I often feel like living among two worlds, the “normal” and the “leukemia” world.

Nevertheless, I have become more optimistic and I try to think positive. You can see a glass of water half-emptied or half-full. I choose the second one. I also try to keep my smile and I have developed a good sense of humor.

In 2000, I faced another severe health problem. I couldn’t hear well from my left ear and this ended up to be due to a tumor in the inner part of my ear. Despite of the successful treatment, I have completely lost my hearing from left side. This fact had socked me. I was adult and I could recognise that this health “inconvenience” was not life-threatening but the reasons of my sock were mainly two. Firstly, this “inconvenience” has a very big and active impact on my everyday life: I can’t hear well. Secondly, and mainly, I was shacked because, after leukaemia, I had developed a “life philosophy” which said that I had “paid my health bills”. As far as my health, nothing worse – worse than cancer? - could happen and if something happen, I will be strong enough to handle it. Leukaemia was “the worst” that could happen and it was more than enough for my whole life… “Mesdames and Messieurs, fasten your seatbelts. The crash landing has already begun…”

The same life that emerged me as the winner at my 10, at my 21, was showing her real face. “Welcome back to reality”. I am not the super-hero or the gladiator that I can face and win everything due to my prior and, early in life, win of childhood cancer. I haven’t “paid my bills” in whole. And this, after a lot of thinking and counting, is logical. If we divide our life into 5 equal parts, each one contains 15 years –assuming that we will live 75 years. Childhood cancer happened at the 1st fifth. We (survivors) have other 4 fifths in front of us to live. The odds are against us. It seems more than possible that we will face another health problem in the future. And we should be prepared for this. Someone has to ground us. “OK you super-hero, have a party now but bear in mind that something ‘bad’ may come”. Don’t keep telling us fairy-tales: “Everything bad has ended. From now on you will live only good things”. Just, try to prepare us for the “real” world. Our “real” life now starts.

Life has no rules. Only lessons.

At the moment, life’s lesson is the following: in any case, you give away something and you take back something else. You both lose and gain. Most of the times, your loss and your profit are not countable. You are not in position to say which is more or less. They differentiate in size, in content, in impact, in time, in duration. Sometimes you lose few and you gain a lot and vice versa. There are no rules or “receipts of success” that you can follow. You will both win and lose a lot and you cannot, usually, sort them out.

I have come to the conclusion that you cannot live in hope of a better past. That’s it -good or bad-. It cannot be different. The only thing you can do is to go ahead. What the future will reveal is unknown and there is no way to find it out in time. You can only “filter” your past and, with the lessons of the granddad Time in your luggage, get prepared for everything.

“Life is a raft

which vanishes into the boundless ocean of tomorrow” 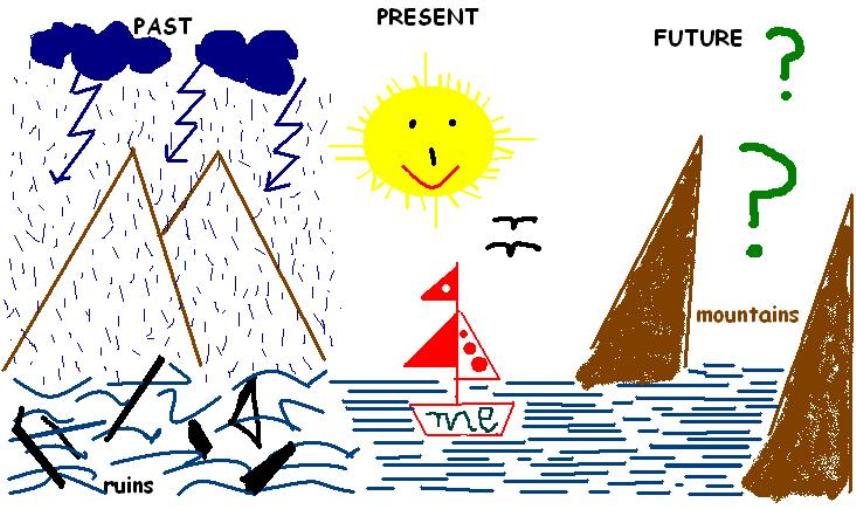 The future is hidden behind the mountains.

-And if these are the Clashing Rocks?

There is only one way to discover it, to live it!