ASCO (the American Society of Clinical Oncology) is one of the largest professional societies worldwide, with more than 40,000 members.
Every year, the ASCO annual meeting delivers new research and hope for cancer patients worldwide - and this year's is no exception. In this article we provide details on a significant breast cancer finding, straight from Chicago.

How long should breast cancer patients take aromatase inhibitors for?

One of the most discussed studies was one focusing on postmenopausal women with hormonal-receptor positive breast cancer. In particular, it was shown that by extending aromatase inhibitors to 10 years, beyond the standard 5 years, these women have better outcomes.

Aromatase Inhibitors (AIs) include anastrozole, letrozole, exemestane and others.

While 5 years of AIs has become standard practice for many women in this category, there had not been adequate trials to understand what changes when this treatment period is extended. The study was presented by Paul E. Goss, MD, PhD, of Massachusetts General Hospital Cancer Center and Harvard Medical School during the ASCO Plenary Session on the 5th of June.

The trial included 1,918 postmenopausal women with early-stage breast cancer, who had received aromatase inhibitor therapy for 5 years at the time. Most of them had received tamoxifen, and only 20% had not received any in the past.

Within the trial, these patients received either an aromatase inhibitor (letrozole in particular) or placebo; in other words, some of the women received prolonged therapy with AIs.

The recurrence rate for women who took AIs for the longer period was reduced by 34%.

At the 5-year follow-up, 95% of women receiving letrozole and 91% of those receiving placebo were breast cancer free.

Furthermore, the annual incidence rate of cancer in the other, unaffected breast, was significantly lower for those taking letrozole (0.21%) compared to those taking placebo (0.49%).

Regarding side-effects, there was no overall difference between the groups. On the other hand, those patients receiving letrozole reported more bone pain, fractures and osteoporosis – but still, there were relatively few women affected compared to the size of the groups. 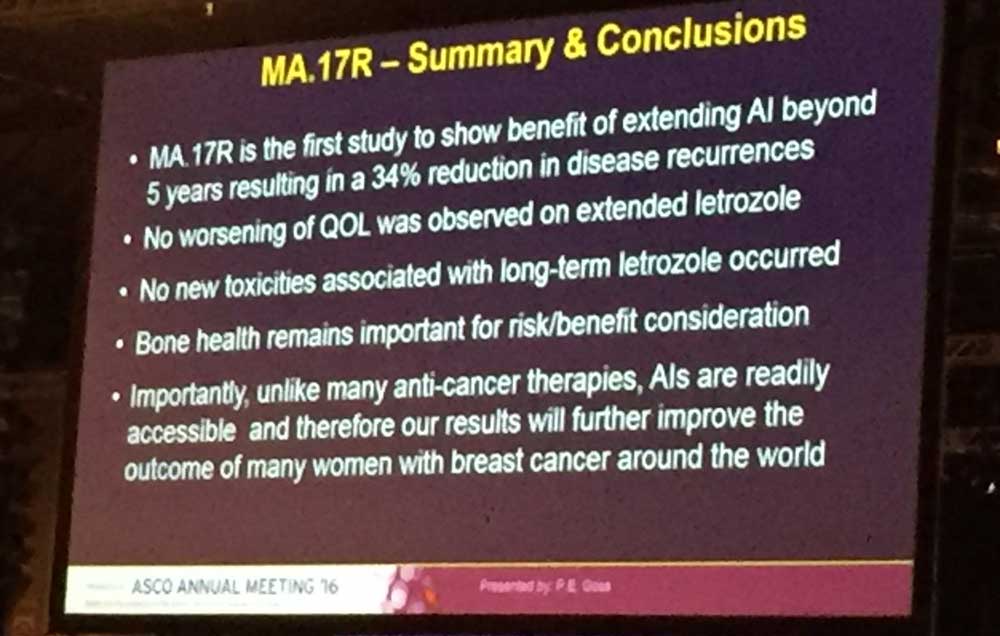 The presenter, Dr Goss, said that this is the first study to demonstrated such benefit, but also noted that the bone-related side-effects cannot be ignored and bone health remains an important factor to consider when weighing the risks against the benefits of extending aromatase inhibitors.

Dr Ian Smith from the Royal Marsden Hospital, who provided comments on the results, stated that these side-effects come in small numbers and so they are “not a big deal”. He also stated that if patients have managed to stay on these aromatase inhibitors beyond early unpleasant side-effects, based on these data, he might tell them they could carry on with the treatment for longer.

Harold J. Burstein, MD, PhD, of the Dana-Farber Cancer Institute (an ASCO breast cancer expert), said that “there will be tremendous interest in longer duration of therapy with an aromatase inhibitor,” but he noted that therapy will likely be tailored based on specific patients’ risk factors. The study, he said, shows that longer duration of AI treatment is clinically valuable, but exactly how long is not yet clear.