Maddie started blogging only a few days after her breast cancer diagnosis. As if that wasn’t enough, during her radiotherapy treatments she started a breast and testicular cancer awareness charity called Feel Yourself Campaign.

She answered our questions and shared more about her journey.

I started blogging a few days after I was diagnosed with breast cancer. I bumped into a friend from university who had also just had breast cancer and she suggested I keep a diary, but I couldn't seem to write anything down. I decided to try blogging as it seemed like a great way to get my feelings down and record all the things that were happening to me as a result of having cancer. 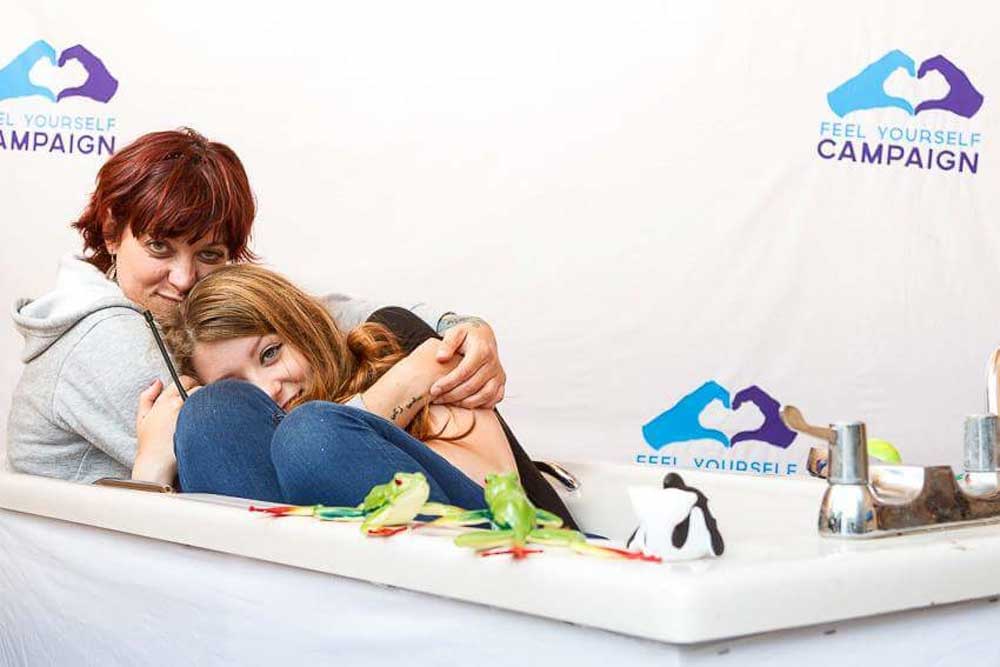 Giving birth to a fourth child… instead of having chemo

I'm 43 now but was diagnosed a few weeks after my 40th birthday in 2012 - five days before Christmas! It was obviously an incredible shock and I found that Christmas very difficult to negotiate. I didn't know anything about breast cancer really, so I started researching the different types and grades and realised mine was pretty serious as it was grade 3, stage 3 and both oestrogen and progesterone positive in high levels.

I told my three children straight away. My sons were 5 and 6 at the time and a bit too young to understand, but my 15 year old daughter was terrified I was going to die. I remember very clearly thinking I'd have surgery and then everything would be fine and I could go back to work as an English teacher within a couple of weeks. When they told me I needed chemotherapy as well as radiotherapy I was devastated.

My husband and I were planning to try for a baby in the new year and instead I was being told that chemo would make me infertile and at my age I was unlikely to ever have another child if I had the treatment. After an agonising six weeks I finally decided not to have chemotherapy but to have radiotherapy and delay endocrine therapy until I'd had the baby. My consultant was incredibly supportive of my decision. My fourth child was born in December 2014, and I started on Tamoxifen and Zoladex two weeks after her birth.

Unfortunately, what with the all the pregnancy hormones floating about in my system, Zoladex - which completely shuts down the ovaries - was too much and I ended up in hospital with post-partum psychosis. My consultant stopped the Zoladex and I've since had a complete hysterectomy and oopherectomy as part of my cancer treatment. I will be on an Aromatase Inhibitor for the next five years.

From finding a lump to getting the all-clear

My consultant found a new lump in my healthy breast at a routine check up and an initial ultrasound and mammogram were inconclusive so I had to wait for another appointment with the consultant. It was pretty nerve wracking but I used the blog to rationalise some of the stress and fear I was experiencing.

For a cancer patient, having to go back and experience the same diagnostic tests can act as a trigger, and I was very aware that part of the stress and fear came from memories. I had to keep reminding myself that I knew something was wrong with me when I had cancer, I felt ill. This time I felt healthy so I tried to cling on to that. Luckily I got the all clear after another scan.

With a little help from my friends… and my husband

I think my favourite post is the one I wrote about all the ways my husband was helping me just after surgery. It was fun to write and showed that you can still laugh even in the darkest times.

Blogging can reach many different people all at once

Initially my goals with blogging were to record the experience of having cancer for myself, but I soon realised that it was a unique way to reach many different people at the same time. My family and friends were able to follow my journey through cancer and the aftermath of treatment, and it became a way of telling people what was going on. During the height of my treatment it saved me having to text or phone several different people.

Engaging with others online

I read other breast cancer blogs and also some testicular cancer ones too. While I was still having radiotherapy I started a breast and testicular cancer awareness charity called Feel Yourself Campaign, so I read blogs associated with that. I'm also a member of the Younger Breast Cancer Network on Facebook and I read blogs posted by other members. I would recommend But Doctor I Hate Pink as a good blog to follow. It's funny as well as incredibly poignant.

Blogging can help patients and caregivers to rationalise the experience

I would definitely recommend blogging to other patients, even if you don't publish your blog but keep it private. The act of writing things down can help enormously with gaining perspective. I read about a study a couple of years ago where patients were encouraged to blog and those who did experienced less depression than the control group. Depression is one side of a cancer diagnosis that often goes unreported. It's assumed that once you are told there's No Evidence of Disease that you've won a battle, come out victorious and should be over the moon, but most patients feel lonely, isolated and confused once treatment stops, and depression is a real problem.

Cancer is an unfortunate and horribly unlucky thing that no one deserves. It is a life changer, and whatever the outcome its effects go on long after diagnosis. Blogging can help patients and caregivers to rationalise the experience.