Lung cancer is the most deadly cancer worldwide, claiming the lives of more than 1.5 million people annually. During the 2014 Congress of the European Society for Medical Oncology (ESMO), it received a lot of attention, and hopefully this will translate to benefits for patients.

Our Chief Medical Officer attended the Congress and summarizes the key findings. 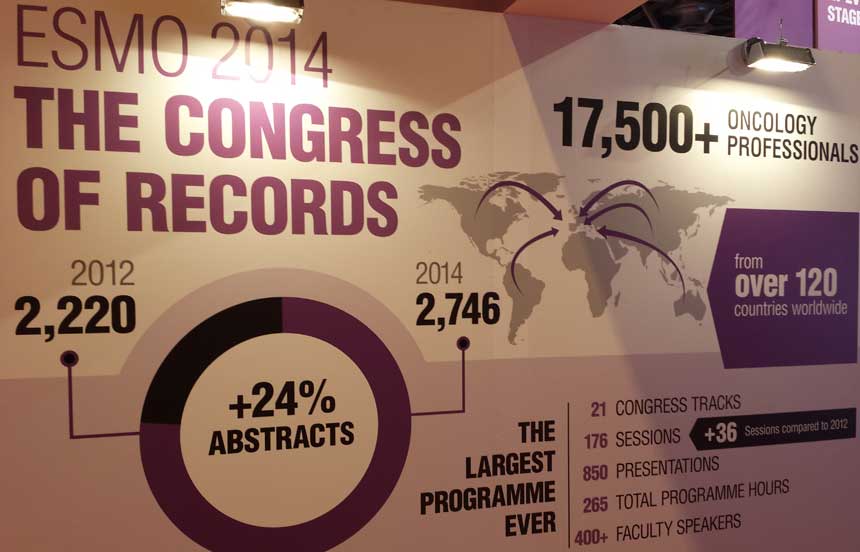 An analysis of patients with advanced non-small cell lung cancer, the agent Pembrolizumab showed some promise. The disease at this stage is particularly challenging, which makes the 20% overall response rate an important metric. Interestingly, the agent was found more effective in patients who smoke, but also among those with tumors which had an over-expression of a particular protein called PD-L1 (“Programmed death ligand 1”). [1]

Among the international team of researchers was Dr Jean-Charles Soria from the Gustave Roussy Cancer Center in France, who is a member of the CareAcross Scientific Committee.

In patients with advanced non-small cell lung cancer with rearrangements of the ALK gene, crizotinib is currently the best agent available. Researchers from Japan focused on those patients whose tumors develop resistance, and indicated other promising novel agents, including ceritinib and alectinib. As a matter of fact, for those patients who develop brain metastasis, alectinib was found the most effective. [2]

Patients with EGFR mutated advanced lung adenocarcinoma are treated with specific targeted drugs such as erlotinib, gefitinib or afatinib. If the disease reappears because of drug resistance, then chemotherapy is mandatory. A broad team of researchers found in a study that the addition of a targeted agent to the chemotherapy is not helpful. [3]

Among the researchers was Dr Tony Mok from Hong-Kong, another member of the CareAcross Scientific Committee, as well as Dr Jean-Charles Soria who also contributed to the first study mentioned above.